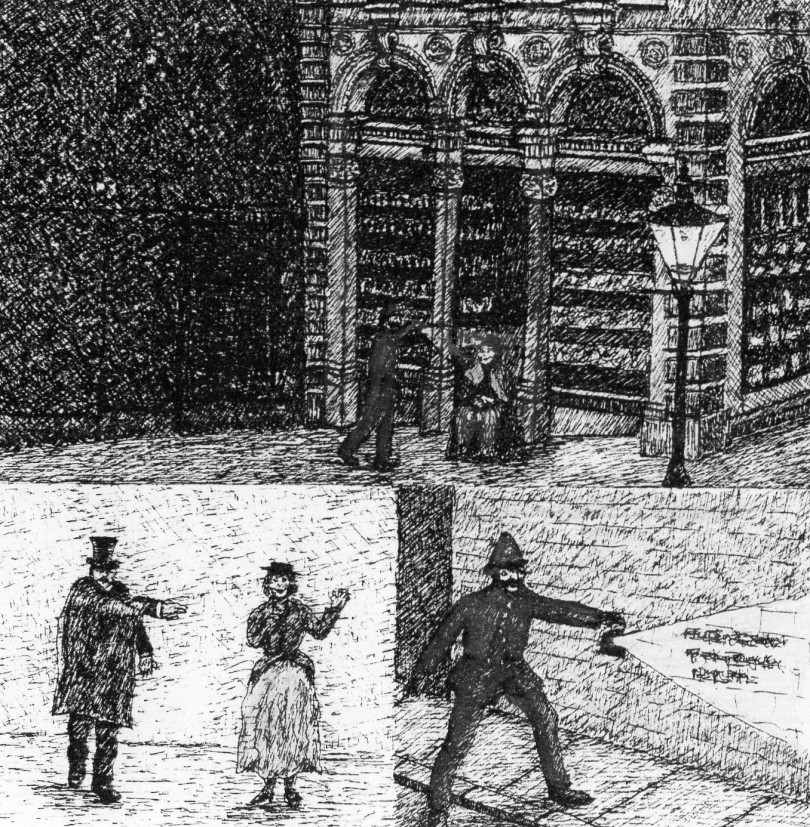 Letter received at the History Maintenance Commission from Claude Dupree, one of the leading authorities on the criminal mind and the psychology of deviant behaviours, as he warns of the consequences of allowing Jack The Ripper to do a First Aid Course in the fall of 1888, just prior to his sequence of grisly murders on the streets of Whitechapel, London.

We have included his salient points in our appraisal of this letter.

World Healthier Living Organization  (Texas Branch) Chief Executive Officer Claude Dupree, has composed an open letter to the commission expressing his grave concerns regarding the rumours that Jack The Ripper might be persuaded to undertake a First Aid Course leading up to the Autumn of 1888, a period etched in infamy due to his barbaric murder spree amongst the sex workers of old London town.

It is normally the practice for the History Maintenance Commission to initiate an exploratory dossier on how a different route undertaken by an important figure from the past could impact upon our present, and if the findings arrive at alarming conclusions then to act to dissuade the figure from adopting that new course. But here, The World Healthier Living Organization have stepped in before the results of the investigation have been anywhere near exhausted.

‘We felt that we had to say something and now is as opportune a moment as any,’ Dupree declared. ‘I am a criminologist of some repute. I can only spell it out to you and as succinctly as possible, but the thought of Jack The Ripper taking a First Aid Course has ramifications that could well prove as disastrous as the dropping of the world’s first atom bomb. It could be THAT cataclysmic!’

Dupree bases this, quite frankly, startling alarm call on what he knows of the criminal brain.

‘Serial murderers are compulsive in their behaviours,’ he explained, ‘Jack The Ripper is no exception, Like other serial killers he displayed repetitive themes and focused upon familiar locations where he was comfortable to perform his deviance.’

The contention of the World Healthier Living Organization is that if Jack The Ripper takes a course in First Aid, his compulsive behaviours and deviant mindset will see him not content to simply save a life or two here or there. The man will be Hell bent on becoming a serial life-saver. Indeed, the world’s first serial life-saver.

‘There is no record, whatsoever, of anyone displaying such mind warping behaviours in the Victorian era. People were overwhelmingly decent back then, such a perversion would never have occurred to the average man. One would need to possess a severely disturbed mind to ever contemplate terrorising whole downtrodden communities with the threat of preserving their existences so that they can suffer the inhumanities and degredations of ‘life’ for want of a better word in Victorian Britain amongst the poor.’

‘Please do not make the mistake of equating their times with our prosperous ones of today. If a serial life-saver was on the loose in the present he or she would attain hero/heroine status and be revered wherever social media could penetrate. For ours is a luxurious world full of self fulfilment, entertainment, comfort and good health practices and assistance in maintaining such fruitful lifestyles. But the Victorian era was a quite different animal.’

Dupree went on to furnish The World Healthier Living Organization argument with a whole list of horrors that the Victorian poor had to endure on a daily basis  (one of which being the Victorian rich). Things such as the workhouse, incurable and disabling diseases such as consumption, living rough in rags on the streets as there was no benefits system to assist in times of hardship, children dying up chimneys they were forced through necessity to perilously clean, while other children sold their bodies on the streets and picked up disabling STDs that blighted their lives thereafter. Malnutrition was rife and its consequences clearly visible with cases of rickets a normalcy. As life was so cheap then violence particularly inflicted upon women and children was a frequent occurrence.

‘These poor souls were further encumbered by the fact they had few respites to transport them, albeit temporarily, from their living Hell,’ Claude Dupree further explained. ‘No cinema, TV, no holidays by the sea. Those that were lucky enough to be in employment worked long, hard hours that literally exhausted them and prematurely aged them. Those that didn’t work were either placed in the workhouse where they laboured until they dropped or they starved on the streets and became reliant upon petty pilfering or selling their bodies to survive or at least purchase some cheap gin to provide temporary anaesthesia to dull the excrutiating pain of their existence but cause yet more health problems to rack their emaciated frames later on.’

When Jack The Ripper is mentioned in such a context, Claude Dupree can barely contain his contempt.

‘These urban poor, the very same people the habitual Jack The Ripper preyed upon in Whitechapel, would have looked upon death as a release from this pungent world of open sewers and horse manured streets. A journey towards everlasting peace. Yet, without a doubt, and I speak with 35 years of expertise in the field, had Jack The Ripper taken a course in First Aid it is these, the downtrodden poor under Victoria’s very skirts whose lives he would have saved so they could be all the more brutalized. It would take one sick minded Bastard to become a serial life-saver in such a deprived community. Knowing what I know of The Whitechapel Fiend, he has every trait required to assume such a role. Furthermore, the impact such a sick notion that a serial life-saver was on the loose in their community would have impacted detrimentally upon the mental well-being of these people and its consequences would have been felt for generations to follow.’

This site uses Akismet to reduce spam. Learn how your comment data is processed.

All Copyright Jonty Morgan 2020 Unauthorized use and/or duplication of this material without express and written permission from this blog's author and/or owner is strictly prohibited. Excerpts and links may be used, provided that full and clear credit is given to Jonty Morgan and with appropriate and specific direction to the original content.